How to identify tourmaline? There are two types of common bicarris replicas, one is artificially colored with colorless tourmaline; the other is made of red glass. The method of identification is that the true tourmaline often has obvious dichroism, and the double shadow is visible. Let's take a look at the main points of identification. 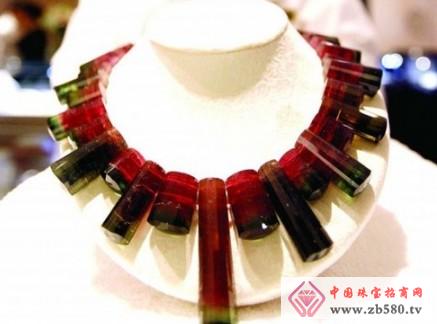 In the identification of tourmaline, the key points are as follows:

The amount of hand rubbing is heavier than crystal and glass.

Tourmaline is one of the most colorful gemstones, and different colors can appear on the same crystal, such as yellow and green, pink and yellow, red and blue, and so on.

In the transmitted light, the tourmaline is observed at different angles, and its color tone and brightness are changed. The amethyst is not obvious, and the glass does not appear.

The tourmaline has a refractive index of 1.616â€”1.650 and a birefringence of 0.044. The magnifying glass is observed through the tourmaline crystal, and the surface of the back face and the impurities will have a significant ghost effect.

Tourmaline has a thermoelectric effect, which can pick up fine dust and paper scraps after friction.

For natural tourmaline crystals, the growth of the curved triangular cylinder and the parallel cylinder is the main feature distinguishing crystal and beryl.

To identify tourmaline, the methods described above are simple and effective. With this knowledge in mind, you don't have to worry about buying a tourmaline.

Christmas is the most popular time of the year for people to burn candles. They can be used at gatherings with family and friends or be given as gifts for Christmas. Whatever the case may be it`s always a nice feeling to have a candle burning during the cold months to cozy up with.

Today we will be sharing some of the best and most popular candles for Christmas time. Unsure of what candles to light up during this holiday season?

Allow us to recommend some of our personal favorites for this time of the year!